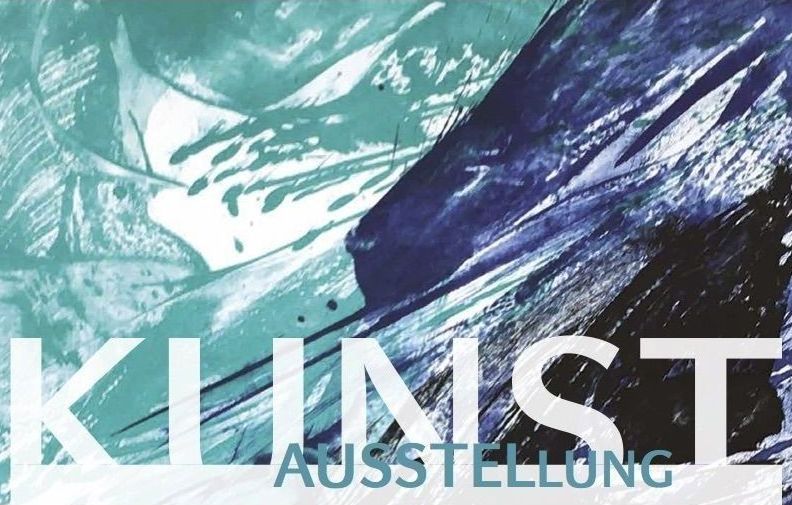 Summary: In 2017, science-related artists and border crossers, as well as journalists dealing with the topic “Art and Science”, who share a close connection to Düsseldorf (to the university, the academy, the city), were invited to participate in an exhibition at Haus der Universität (House of the University) about Karl Otto Götz as an artist, as well as a scientist. Other border crossers between science and the visual arts included Meral Alma, Volker Beeh, Markus Schrenk and Peter Tepe. Hugo Bugoslawski and Barbara Herbert represented the science-related arts. The exhibition also referred to w/k articles by Alexander Becker, Irene Daum and Moritz Niehues.

The exhibition Art and Science: Examples of symbiotic relations took place from 16 November 2017 to 31 January 2018 at Haus der Universität on Schadowplatz 14 in Düsseldorf (with a one-month extension).

The following exhibition report is divided into two parts. This is the first part, which includes the exhibition poster, the exhibition catalogue (available as a PDF here), the welcome speech given by w/k editor Peter Tepe on 16 November 2017, a video on the exhibition and photos by Karsten Enderlein.

Welcome speech by the publisher

After the introduction by Associate Professor Dr Christoph auf der Horst, the Deputy Director of Haus der Universität, I would like to introduce you to the people involved in the exhibition and explain the concept. The exhibition Art and Science: Examples of symbiotic relations is a collaboration between Haus der Universität, represented by Christoph auf der Horst, Jill Praus and Kai Buers; Meral Alma’s Kunstakademie.gallery; and the online-journal w/k — Between Science & Art, founded and published by me.

I begin by explaining the title: ‘symbiotic relations’ refers to the individual connections that exist between science and art. There are many connections of this kind; in w/k, we split them into three main categories:

The first category includes artists who rely upon scientific knowledge in their work. We call them science-related artists. (Most artists do not work science-related. Of course there is nothing wrong with that, however they are not the core of this exhibition.)

The second category includes those individuals who work in both the scientific and artistic fields — we call them border crossers between the two areas.

The third category includes artists working together with scientists: the collaboration between at least one artist and at least one scientist.

Based on this distinction I now turn to the exhibitors, who are all present with one exception. When I mention your name, please raise your hand so that those who are interested can recognise you and contact you later.

There are many artists in the world who take a scientific approach to their artistic practice. This exhibition features a prime example of such an artist: Hugo Boguslawski, currently living in Düsseldorf, who studied not only art but also biology in Münster. He is deeply engaged in disciplines such as paleontology, geology, theory of evolution. These scientific influences are present in his structural painting shown on the 2nd floor. He uses, for instance, rocks that he found as a source of inspiration; you will find these presented in a showcase.

Another example of science-related art, albeit only indirectly represented, can be found on the 3rd floor: an information panel refers to a w/k article by Irene Daum, a psychologist, neuroscientist and art journalist living in Düsseldorf, which was published shortly before the opening of this exhibition. The article focuses on Barbara Herbert, an artist from Düsseldorf whose work is also characterised by strong scientific influences, but in a very different way from that of Hugo Boguslawski. Barbara Herbert draws upon disciplines such as psychology, pedagogy and musicology. Against this background, her new works critically examine contemporary concepts of beauty.

In addition to the science-related artists, the otherwise rather rare border crossers are even more strongly represented in this exhibition. One of these border crossers is Markus Schrenk. He is professor of theoretical philosophy at the Heinrich-Heine-University but also works artistically; two of his objects are displayed on the 1st floor, one of which is new. It alludes to a work by Kasimir Malewitsch and uses the means of concrete poetry.

The second border crosser is professor Volker Beeh, a retired language scientist from Düsseldorf. For decades he has also been active as a photographer, which has led him to partake in various exhibitions. 10 of his photos are also exhibited on the 1st floor.

My own works complete the exhibits shown on the 1st floor: I am a philosopher and literary scholar at theHeinrich-Heine-University. I also studied for some time at the Kunstakademie Düsseldorf and resumed my artistic practice several years ago.

For the three border crossers mentioned above, scientific activity takes precedence over artistic activity. However, for Meral Alma the opposite is the case. She is about to finish her painting studies at the art academy in Düsseldorf. Twice in a row she won a scholarship from the academy, and has already achieved great success as an artist. Before pursuing an art degree, she studied German philology and sociology at the Heinrich-Heine-University. She can be classified a border crosser as she is working on her dissertation in literary studies in addition to her more dominant artistic activity. Her works fill the 2nd floor, together with those of Hugo Boguslawski.

One outstanding example of a border crosser between science and the visual arts is Karl Otto Götz, who recently died at the age of 103. He was a world-renowned artist, who, like his wife, Rissa, taught for decades at the art academy in Düsseldorf. Götz belongs to the few artists who have worked, or still work independently in the scientific field. Closely collaborating with Rissa as an empirical psychologist in the 1960s and 1970s, he worked together with leading psychologists of his time such as Hans Jürgen Eysenck and Daniel Berlyne to develop and practically apply test procedures to determine aesthetic competence. Sadly, his successive blindness made it impossible for him to continue his scientific work decades ago and also made it increasingly difficult for him to continue working artistically.

The screen in the foyer presents some of the image pairs that Götz collated for his self-devised Visual Aesthetic Sensitivity Test. Further scientific works by Götz are also on display in a showcase, whereby the book Probleme der Bildästhetik [Problems of image aesthetics], written together with Rissa, is particularly noteworthy. Moreover, Rissa has kindly provided two of Götz’s graphic works for this exhibition.

But that’s not all. The 3rd floor exhibits five information panels referring to various w/k articles; three of them were only published in the last few days. The philosopher Alexander Becker (previously at the university in Düsseldorf, now at the university of Marburg) presents a new thesis on the relationship between art and science, and in his latest article he explores the question whether and how science can become visible in an artwork. Irene Daum, whose first article I referred to earlier, informs in her second article about the current state of research of psychology on art by exploring a variety of perspectives on the topic. Finally, w/k’s chief editor Moritz Niehues, who lives in Düsseldorf and previously studied at the Heinrich-Heine-University, gives an introduction to Leonardo da Vinci as a border crosser, focusing particularly on “Leonardo as a pioneer of modern science and technology”.

On all four floors you will find information panels showing passages from w/k articles. Each panel has a QR code that visitors can scan using their smartphone to get immediate access to the complete w/k articles during their exhibition visit. Those who are not so familiar with the use of QR codes can read them at home via the w/k website.

Finally, I return to our main point of departure for the exhibition concept: We selected science-related artists and border crossers, as well as journalists dealing with the topic “Art and Science”, who all share a close connection to Düsseldorf—to the university, to the academy, to the city. The beautiful Haus der Universität is the perfect place to realise this concept.

I hope you enjoy the exhibition, and that we will have many fruitful discussions. Thank you for your attention.

Photos of the opening by Karsten Enderlein

▷ More photos of the opening by Karsten Enderlein

Header image above text: Front side of the invitation card.

Circus & the Avant-Gardes: Between Science and Art

Circus & the Avant-Gardes: Between Science and Art